Home Gambling Are All Mathematicians Good at Gambling Games?

You might have been struggling with your recent gambling ventures even though your math scores were perfect back in the day. In the eyes of a layman, calculus might appear unrealistic. Regardless of what knowledge of mathematics you might reckon you have, there are more than a few factors you should consider before concluding the potential relationship between the two. For that reason, we kindly invite you to go through the following lines and gather interesting pieces of information that should help you resolve whether all mathematicians are good at gambling games!

What Sort of Mathematicians?

To make a long story short, we should underline the important differences between contrasting branches of math. Namely, just because an individual is proficient in a particular field of maths does not necessarily mean they have to be prolific in another to be considered a good mathematician.

Experts claim anything happening out there can be described with a simple mathematical formula, still, it is unlikely to expect flawless gambling performance from a trigonometry master. On the other hand, a lady or a gentleman having basic skills in statistics or trend prediction would have incomparably more chances of increasing the balance on their gambling accounts.

Finally, we would like to focus on what means to be good at something. A Ph.D. student of mathematics surely has more knowledge about any sphere of mathematics than an average layman, but it does not matter if the future expert reckons he is good at what they do. On the other hand, a person who handles numbers in a fashion that satisfies their gambling wants and needs might deem themselves as if they had the secret knowledge nobody else has.

In a nutshell, the more an individual truly knows about a specific topic, the more they should be amazed at how much more there is to learn, so they would consider themselves not as closely close to perfection as they would want to become. Just to make things clear, we underline the aforementioned goes for die-hard gamblers as well as for passionate mathematicians.

The Game of Choice

In a nutshell, one should stay away from gambling if they do not know how to handle basic math skills. The rule of thumb warns that if you have no idea what the invested amount can potentially bring to the table alongside the risk, then you should stay away from gambling, especially in the long run. Yet, one should not neglect the luck factor and the essence that kept the games of chance as popular as they have been from day one.

Now, when we talk about peculiar games, we would like to draw your attention to one of the all-time favorites, such as the Black Jack. All you have to do to win the game is to count the cards and win over the house, but no matter how simple the concept might appear, it requires almost impeccable concentration to master the craft of doing it flawlessly. Add it to a virtual realm, and the player has to think about numerous other things such as bonuses for casino players if they want to remain in the driving seat.

If you have not watched the Rain Man starring Dustin Hoffman, we urge you to give it a try, and if you have, you should grasp the point we are trying to make.

What we would also like to point out is that being good at math does not mean you have other necessary parts of the toolset to win at peculiar gambling games. If we analyze how Texas Holdem is played, we should conclude that it is not always the strongest hand that wins, moreover, the sharpest mind in combination with alternative assets such as bluffs and interpretation of the opponent.

What Gambling Games Should Mathematicians Go for?

The shortest answer to the quiz would reflect any game that one can gather a sufficient amount of data to analyze and compare to make a bet. On the other hand, a more detailed rapport would imply one focuses on sports predictions and gambling games, such as roulette, that have the least influence from the human factor.

When talking about sports, it is of utter importance to mention the vast field of options one can put their money on concentrating on a single match. The victor, the number of points or goals scored, the first one who fouls or gets fouled, the first free kick, etc. A good mathematician would probably disregard the names of the opposing sides and focus on the numbers. As we have already mentioned, the numbers are plain but merciless, so they can easily hint at the correct outcome if interpreted properly.

What good mathematicians who enjoy gambling also prefer is not to focus on a single match but on a period. Approaching the game that way allows them to manipulate the numbers more easily, and adjust their future bets according to fresh info they gather.

Now, when roulette is concerned, we dare to say it is the most favorable game among mathematicians. They say that if the money is what they would be after, they would not have to break a sweat to make a profit at the end of the day, but it is not all about the money, is it? What grinds the gears of the gambling mathematicians is the literal fight of the odds. If anything can be mathematically predicted, then why nobody has cracked the roulette game up to date? Sincerely, we do not know the answer, for if we would, we would not be writing this article. To add to the mysticism, we dare you to find out which number you get when you total all the numbers from a roulette wheel!

Even though it is hard to say what a person good at mathematics is, we dare to conclude that the ones who know how to handle their numbers have more chances of winning at some gambling games. What we would like to suggest to you is not to forget about the luck factor since without it having fun while trying to win big would be excluded from the equation. 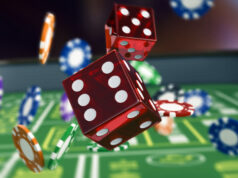 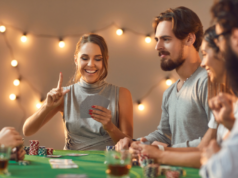 9 Tips to Improve Your Poker Game